I had made GF cinnamon rolls a couple of times previously, but found it an awful lot of work. However, using the recipe from Healthy Bread in Five Minutes a Day, it was a (to mix a metaphor) piece of cake!

Because I always follow a recipe as exactly as I can, the first time I use it (lots of tweaking from there on out), I mixed up the brown-sugar/cinnamon filling from the recipe and dumped it onto the dough, spreading it to the edges with a spoon. Next time I might try my mom's cinnamon roll filling -- spread softened butter (or drizzle melted butter) over the rolled out dough and then sprinkle with cinnamon-sugar (not brown sugar). 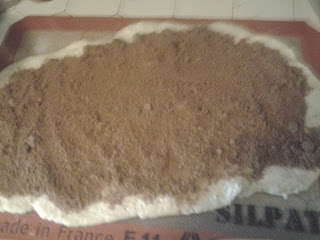 Then roll up into a cylinder... 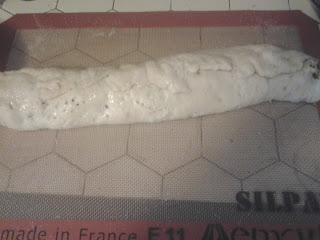 Don't get interrupted, like I did again... You're supposed to remove from the mat and cut into twelve pieces, but I wasn't able to get to it right away and the dough started rising again. When I finally got the pieces cut and into the greased pan, they weren't very pretty. 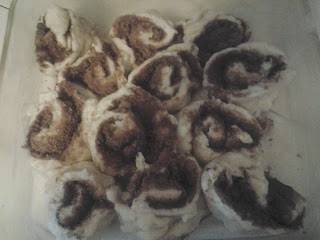 They're rising again, for an hour, and then we'll bake them. The house smells so good, kind of yeasty-cinnamony and scrumptious.

I can see that GF baking is going to be a whole new ballgame around here.

Email ThisBlogThis!Share to TwitterShare to FacebookShare to Pinterest
Labels: If it's Tuesday it must be GF