Bear with me -- the pictures in this post were taken with my phone, not the best camera in the world, but the best we've got at the moment.

Over a year ago, a couple members of our family went gluten free. One of the things they really missed was bread. I looked up lots of GF bread recipes, tried quite a few off the Internet, checked out a number of GF cookbooks from the public library, bought the ones with the tastiest recipes, and basically re-learned how to cook anything involving flour.

One of the books I ended up buying without first trying was Healthy Bread in Five Minutes a Day
by the author of Artisan Bread in Five Minutes a Day, a cookbook I had just begun to explore when it became necessary to get all gluten-containing ingredients out of the house. (Some families can manage divided kitchens, rather like keeping Kosher, I'm told, but with the severe gluten problems here it's just not worth the risk.)

Early on, I tried out one of the recipes from Healthy Bread in Five Minutes a Day. It was a miserable failure; it looked terrible, even though people said it tasted okay.

I didn't have a heavy-duty stand mixer at the time, and I kept running up against GF bread recipes calling for such a mixer. No more hand-kneading dough; that wasn't going to cut it. When Christmas arrived and I saw a good sale, I asked for a Kitchenaid mixer for my present (and birthday, and anniversary, and Mother's Day, if necessary, seeing how it was such a big present). I got one!

Things began looking up in the bread-baking department. Our GF bread recipes started turning out looking and tasting better. I had two pieces of information that made all the difference: mixing the dough with a stand mixer, and baking until the internal temperature was between 205 and 210 F. I don't remember where I first read this, but I've seen it on several GF recipe websites since then.) Even so, it was easier most days just to pick up some GF bread from the store. We found a couple of brands that were passable, and even though it didn't taste as good as homemade, and was sort of dry and crumbly, it was convenient.

I ran across Healthy Bread in Five Minutes a Day last week while getting another cookbook off the shelf, and pondered giving it another try. I had all the ingredients, after all. I even had the heavy-duty stand mixer! 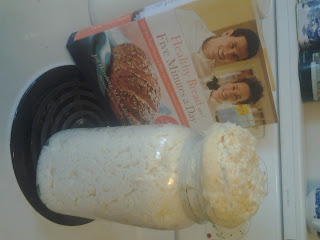 Yesterday, I made up a batch of Gluten-Free Brioche. It rose amazingly (over the top of the large mixing bowl during the 2-hour rise time, and continued to rise in the refrigerator overnight). I shaped 1/3 of the dough into a loaf and baked it in a loaf pan. I'm sorry I don't have any pictures to show you -- we ate it all in record time. It was so GOOD! No sign of the uneven texture and unappetizing "look" that had made me put away the cookbook for months. The heavy-duty stand mixer really made a huge difference.

The dough will keep up to five days in the refrigerator, and the recipe makes three loaves' worth. A loaf can also be a dozen dinner rolls, a pan of monkey bread, or a pan of cinnamon rolls, by the way.

...which is what we're doing today. I took some pictures with my phone, so you actually get to see what I'm talking about today. 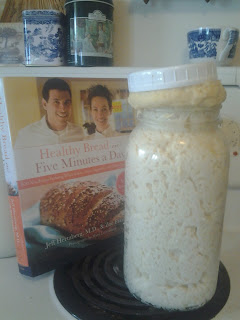 It almost looks like it's smiling and tipping its hat, doesn't it? I really didn't think it would rise all that much more, yesterday, or I'd have put it in a larger container. This jar was only about 2/3 full when I put the leftover dough in, after baking a loaf of bread yesterday.

Talk about convenience! With the dough already made, all I had to do was roll it out, mix up a simple filling, spread, roll up, cut, and put into a greased pan.

Can it get any easier than that? With the same amount of effort that it takes to stir up a loaf (maybe two) of gluten-free bread, I can bake a loaf and still have dough waiting in my refrigerator, ready to bake.

I may never have to resort to store-bought GF bread again... 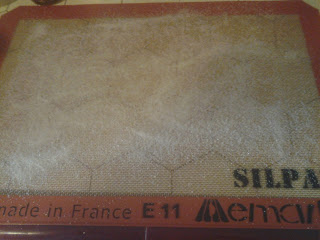 Next, add the dough, about the size of a cantaloupe. 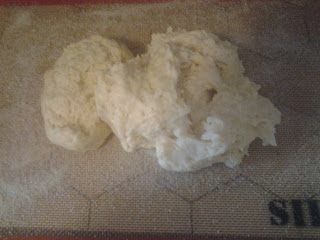 Lay on a piece of plastic wrap and roll out to about 1/4 inch. I had just finished the rolling out and was starting to lift the plastic wrap off when the phone rang. The plastic wrap was coming off easily but when I was interrupted, I left it on and ten minutes later it was beginning to stick to the dough. Lesson learned -- roll out the dough and get that wrap right off! 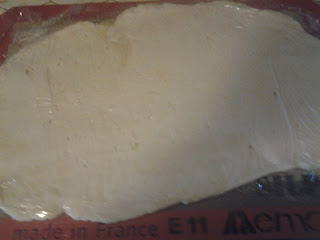 Email ThisBlogThis!Share to TwitterShare to FacebookShare to Pinterest
Labels: If it's Tuesday it must be GF