Book Review: The Secret of N'de

Being an author myself, I hate to write a negative review. However, I think I owe this cautionary note to the parents of voracious readers who don't always have time to pre-read a book before recommending it to their teens.

I've become a little more cautious in approaching our reading. I've been burned a couple of times, regarding book recommendations. I'm learning to consider the source. Not everyone has the same taste. (What a boring world it would be, if they did?)

For example, a friend recommended I read The Time Traveler's Wife.

Now, this friend writes some incredible fiction that she publishes online, and I've greatly enjoyed reading her stories. However, when she recommends books to me, I have to keep in mind that the website we both write for is somewhat censored, in that there are standards and ratings (something like the movie rating system in theaters). There are specific things that are not allowed on that site, which oddly enough allows a certain freedom in reading.

...coming back to my point -- she really enjoyed that book, and I found it was not to my taste. In the reading (and I was not able to finish that book, just could not force myself to keep reading), I remembered that while my friend writes wonderful stories even within constraints, there are times when I've found our conversations about real-life interests disturbing. (Let's face it. There's a lot in real life that can be disturbing.) I still love to read her stories, but I approach book recommendations with some caution.

Lately I've been investigating Christian fantasy, or maybe you'd call it allegory. A lot of teens of my acquaintance have a taste for the genre. Books have been published to feed this appetite, alternatives to secular fantasy that can be disturbingly graphic in depictions of sex and violence. These books are written for the Christian market, many with spiritual themes. Such books include 100 Cupboards, The Light of Eidon, The Bark of the Bog Owl, The King of the Trees, and their sequels. (The books I've named are examples of well-written fiction. I have also read some horrible books that were touted as "the Christian alternative to Harry Potter." I won't dignify them by mentioning their titles here.) The Mirror of N'de was the latest in the Christian fantasy genre to appear on my radar. 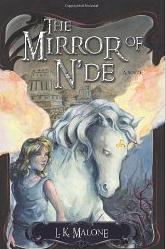 I just had this niggling need to pre-read it before recommending it to our teens. I'm so glad I did that! Definitely not right for them. They don't need to add those vivid images to their storehouse of nightmares. This morning I am still haunted by some of what I read.

Here is the publisher's description, from Amazon.com:

In the mythical city of N'de lives thirteen-year-old Hadlay and her people, the Ramash. Scorned and abused by the unloving and absent Emperor, the Ramash are poor people, placed second to the ruling class of the Oresed. Young but bold, Hadlay rages against the injustice in her city. When she is chosen for the honor of serving the Prince in the Tower, she hopes to find a way to right the wrong . . . but soon discovers that things are worse than she believed.

And here are some pull-quotes from the back of the book, also from Amazon.com:

"This book is a fine choice for young fantasy readers looking to delve into a creative new allegory with a fascinating storyworld, magic, symbolism, and a few neat surprises."
- Jill Williamson, Christy Award-winning author of the Blood of Kings series.

"Fantasy, by definition, is different. The Mirror of N'de is outside of any labeled box. L.K. Malone has written a surprising book of fun and truth. A must-read for every Christian family."
- Donita K. Paul, author of the DragonKeeper Chronicles.


Sounds pretty good, doesn't it? However, I learned my lesson the last time I gave a book to one of our teens, a book that had been recommended as "well written, and a gripping read." Yes, the book was well-written, and yes, it was a gripping read, so much so that the teen couldn't put it down even as it splashed graphic images across her brain and seared her memory with mental pictures that kept her from sleeping for some time after. I'm so sorry about that. You see, once you read a book, you can't go back to where you were before you read it. It leaves an impression on your heart and your brain.

I stayed up way too late reading this book. I couldn't put it down! It's a book that grabs you, draws you in and keeps you interested, but the evil is so very evil... You know, come to think of it, the Bible has a lot of mention of evil, but not terribly descriptive. For example, Jezebel was thrown down from the window, there's just enough detail to get the gist, but not a whole lot of description. The descriptions in The Mirror of N'de are pretty mild if you're used to watching body-count movies or if you play violent video games, but if you haven't seared your sensibilities and built up mental calluses to depictions of gore, you might find the book disturbing.

(Don't get me wrong. I've been there. In my younger days I enjoyed a "good" body-count movie. Examples I can think of include Speed, the Die Hard series, the Lethal Weapon series, Cliffhanger, Under Siege. I even watched the first in the Alien series, though it scared me spitless. I used to read graphic murder mysteries, too, and books by Stephen King, but it's been a long time since I left those habits and my calluses have worn away.)

I wonder if a book written today has to be graphic in its depiction of evil in order to sell, even to Christians?
Posted by Home Sweet Home(school) at 9:57 AM