For all sad words of tongue and pen, the saddest are these, 'It might have been.'
-- John Greenleaf Whittier

I was planning French toast for breakfast tomorrow, operative word being was.

You might remember that I mentioned we have trouble keeping our GF "white bread" around long enough to make into French toast or breadcrumbs. It really is delicious stuff. However, I had managed to reserve a loaf and a half for tomorrow's breakfast, even if I used a bit for tonight's dinner (which I didn't, as it turned out).

The Giant Schnoz had another idea. While most of us were out doing yardwork, she stole the leftover gluten free bread from the plate on the back of the stove.

It's the sort of thing she would have done the first year or two we had her, and we learned to keep food well out of reach. (Even so, there was the time she climbed on top of the dining room table to reach the chocolate stashed on top of a six-foot bookshelf...) But she slowed down, gradually enough that we didn't really notice the change. She slept more, she stopped stealing food (we congratulated ourselves on how well her training was going), she grew more and more mellow. 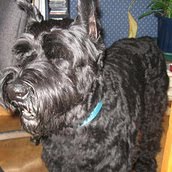 She also developed serious health problems, like food allergies -- there were fewer and fewer things she could eat without getting sick. Her toenails were brittle and broke easily, sometimes at the place where the nail emerges from the toe, meaning a fair-sized vet bill to deal with the situation and head off infection. Lately she had two UTIs in a row. On a hunch the vet tested her thyroid and found it low. That number, along with her low white blood-cell count (a low count despite the fact she had a UTI!) made him pronounce her immune system "practically non-existent."

He prescribed thyroid, and with the thyroid her appetite came back, along with her energy. She became bright eyed and playful. She dropped her excess weight. She lifted her leash from its hook and paraded around, demanding a walk. She began to steal food off the table and kitchen counters, something she hadn't done for years. (Maybe our training wasn't so great after all...)

Oddly enough, this dog who had always been a bit klutzy about catching, suddenly developed the ability to catch treats in mid-air. Perhaps she's better able to concentrate? Or maybe her reaction time has improved with her less tired, less sleepy state?

While I rejoice that we have our Schnauzer back, with all her quirks and mischief (thanks to that daily dose of thyroid), I do regret the loss of tomorrow's French toast...
Posted by Home Sweet Home(school) at 11:40 PM