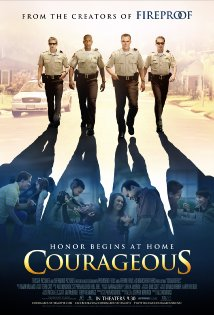 This will be fairly brief, as I ought to have written this review a week ago, right after seeing the movie. However, I still remember enough to give it an enthusiastic thumbs-up.

The theme of the movie is fatherhood. Five fathers, four of them policemen, one an accidental acquaintance who becomes part of a brotherhood of fathers. All swear together to be deliberate in their relationships with their children, setting high standards, being the best fathers they can, with God's help.

Of course, things didn't start out that way. At the beginning of the movie, the main character is... well, he's like a lot of us. He's busy with his job. He takes his family for granted. They're always there. They always will be, won't they? It's painful to watch, but it sets the stage for the change to come.

A tragedy happens to open this father's eyes, and he almost drowns in the pain that follows. Then out of the ashes (to mix a metaphor) arises a new determination, a focus, a goal. He asks his friends to keep him accountable, and they are moved to make the same resolve: to be real fathers to their children.

This is no neat-and-tidy gospel presentation, although the Gospel is there. The people who made this movie show that it takes hard work to live life abundantly, as the Bible would have us live.

The makers of Courageous grow in skill and movie-making maturity with each movie. The seeds of greatness were there in their first movie, Flywheel (which we felt impelled to revisit today), visibly growing in Facing the Giants and Fireproof. There are familiar faces in each movie, not surprising, as one church is behind these efforts. There's the same mix of tears and laughter, a deftness in the timing, realistic (and often dramatic or comedic or both mixed together somehow) dialog.

We were reduced to tears several times during the movie, often bursting out in laughter bare moments after a moving scene through the skill of the scriptwriter and the actors. At the end of the movie, the audience burst into spontaneous applause.